They are in good condition, says legal counsel team after visiting seven suspects of treason case 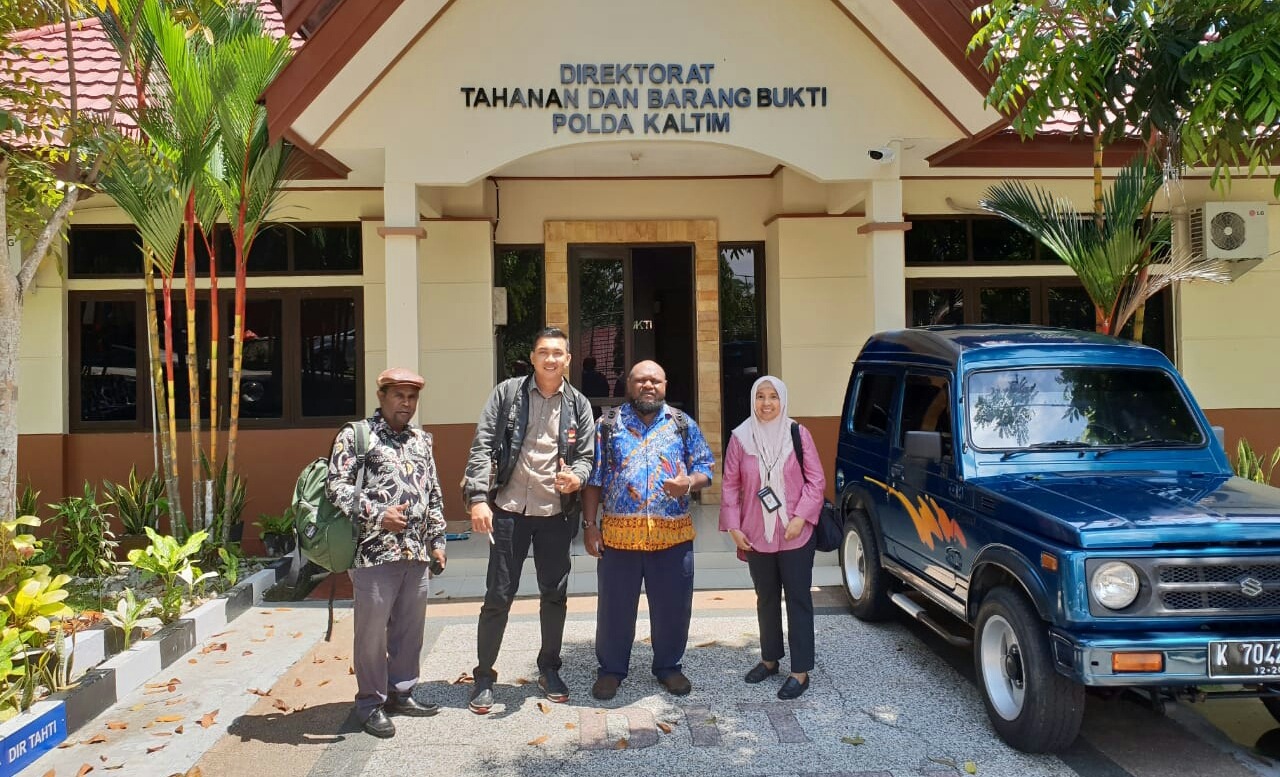 Members of Papua’s Law Enforcement and Human Rights Coalition as the legal counsel team for seven Papuans suspected for treason were in front of the Directorate of Crime and Investigation of the Police Kalimantan Timur. – Jubi/Documentation of Emanuel Gobay

Jayapura, Jubi – The legal counsel team for seven suspects of treason case from Papua stated their clients are in good condition after a visit in Kalimantan Timur.

Towards the transfer, the legal counsel team protested it. Despite the fact the team think it was against the law; the removal of defendants would also detain access for the team in providing legal assistance to their clients.

“Along with us, a priest from the GKI Church in Kalimantan Timur, and an advocate from the Legal Aid Institute of Samarinda Bernard Marbun,” said Gobay by phone from Samarinda, on Thursday afternoon.

“They ask for being transfer back to Jayapura. If not, (better they transfer us to) Manokwari or Sorong, West Papua Province. Before we arrived, their clients have never been visited by anyone,” said Gobay.

Gobay said these seven suspects had explained the chronology of their transfer to Kalimantan Timur. On 3 October 2019 at around 7.00 pm, four suspects including Steven Itlay, Irwanus Urupmabin, Hengky Hilapok and Fery Gombo were taken from there detention in Papua Police Headquarters, Jayapura to Papua Mobile Brigade Headquarters in Kotaraja. There, they met with other defendants Buchtar Tabuni, Agus Kossay and Alexander Gobai.

Next morning on 4 October 2019, the police checked their health condition and told them it was for a medical check before returning them to Papua Police Headquarters. “The suspects were asked to leave their used clothes and to sign a letter without allowing them to read it. The police said they were in a rush,” said Gobay.

It turns out that the police took them to Sentani Airport, Jayapura Regency. There, they asked the police where did they take them away. The police investigators told them they were going to meet the National Police Chief and then back to Jayapura.

“Our clients then demanded the police for allowing them to contact their lawyers’ team and families. But at that time they still didn’t know where to go,” said Gobay.

At around 8.00 am, the seven suspects were flown to Kalimantan Timur by the Indonesian police aircraft. At noon local time, the plane had stopped over in Ambon and arrived in Balikpapan at around 3.00 pm local time.

He asked the public to understand the reason grounded the Papua Police to transfer the custody of the seven defendants from Jayapura to Kalimantan Timur. He confirmed that the decision was made based on public security concern to avoid potential security disruptions in the process of law enforcement.

“This law enforcement means the legal process would be conducted fairly. Therefore, the victims’ families, witnesses, defendants and legal workers would not be intervened. There would be no fear; there would be no intimidation,” he said.

Kamal declared based on the analysis made by the police; the police conclude that Kalimantan Timur is the safest area to continue the legal process against these seven suspected-treason cases.